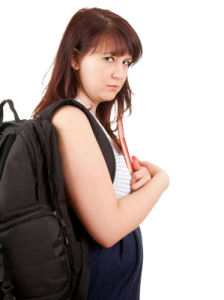 Deanna Cox found out she was pregnant at what seemed like the worst possible time. Kansas State University had just placed her on academic probation for low grades, she had discovered that her boyfriend was cheating on her, and she “really had no idea what to do or where to go.” After discussing her options with a staff member at the free clinic where she had gone for her pregnancy test, Deanna decided to explore adoption. Her school had no resources she knew of for those considering adoption — “no programs directly linked to birthmothers at all.”

As her pregnancy progressed, Deanna found the help she needed off campus, from the adoption counselors who helped her make her adoption plan and ultimately placed her son with the family she chose for him. But she still wishes that her university could have provided her with more support and perhaps connected her with a support group for birthparents and prospective birthparents: “It would have been nice to be able to talk with someone else that had to make the same decision I was trying to make…. As much as other people try to sympathize with you and listen to what you have to say, they do not understand completely what you have gone through and the emotions that you have.”

Amberly Hollingshead, a birthmother who became pregnant while attending North Dakota State University, recalled, “Being pregnant on campus was so hard! My morning sickness was awful. It was so stressful to worry about college and my baby. Until I started showing, no one at my school even knew that I was pregnant.”

“It sometimes seems as though birthmothers are invisible,” noted Leah Outten, a recent graduate of UNC-Charlotte. Leah placed her first daughter for adoption while in high school and later became a student parent to a second daughter while attending college. “I know there must be other birthparents among our thousands of students on campus!”

Starting college as a birthmother was difficult for Leah in part because she didn’t know how to share her experiences with new friends. “When I went to live in the dorm my freshman year, I was scared to put up my daughter’s pictures at first because I knew people would ask, ‘Who is that?’ Even though I was confident in my choice and proud of her and our open adoption, I worried about people judging me for my choice. I wanted people to know me first before judging me, and I still feel like that. Most people I do tell about the adoption are supportive and think our open relationship is great, but of course there are some who just say, ‘I could never do that!’ I often felt hesitant to speak up about my adoption experience for fear of what others might think.”

Like Leah, Amy Hutton was already a birthmother when she began her freshman year at Meredith College in Raleigh, North Carolina, in August 2005. She had given birth just a few weeks prior to the start of classes and chose Meredith because the family with whom she had decided to place her daughter lived in Raleigh. “I really didn’t care where I went to school, as long as I was close enough to see my daughter,” she explained.

Amy was glad to be so close to her daughter, but as a birthmother on campus, she often felt different and very lonely. “When you go through an experience like placing a child for adoption, you are forever changed. I had a very hard time relating to my college peers because of what I had gone through,” she recalled. “School seemed so unimportant compared to what I was still dealing with.

“At an age when the biggest concern for my friends might have been which classes to take or what to wear to the party that night, I had very different concerns: ‘Will my daughter forgive me one day for placing her for adoption?’ ‘Did I make the right decision?’ ‘Could I have raised her on my own?’… I felt like a 40-year-old trapped in an 18-year-old’s body.”

Moving to a new state, attending a college where she knew no one, and coping with the emotional aftermath of placing her daughter for adoption was “almost too much to handle.” Amy battled depression and guilt during her first year of college, “but the hardest part was the feeling of being alone, like I was the only birthmother in the entire world.” At the time, she didn’t know any other birthmothers, on or off campus. She often wished that her school had a support group for birthparents, as well as counselors with more knowledge about adoption.

In 2006, Amy transferred to North Carolina State University, where she served as president of Real Choices, a student organization established to provide support and services to pregnant and parenting students. “After I transferred to NC State and started helping student moms, I began to heal and to finally be at peace with my decision to place my daughter for adoption,” she said. Through her work with Real Choices, Amy also educated her peers on the unique needs of birthparents, helping them become better advocates for this important yet often overlooked group of parents.

Making an adoption plan for one’s child and placing the child with an adoptive family is a difficult journey, according to Amberly, who admitted that at first she “never considered adoption… in fact, I was offended and upset when someone mentioned it as an option.” Later, she said, she began to research it, all the while thinking about what her life and her baby’s life would be like if she decided to parent at that time. “Finally, I knew that [adoption] was the right thing for me,” she said. “I just knew that I had to give my son and myself a chance at a better life. It was the hardest and best thing that I could have done.”

While not all infant adoptions are or need be open ones, with ongoing contact between birthparents and adoptive families, Amberly, Deanna, Leah, and Amy all chose open adoptions. All say they are happy with and grateful for the contact they have maintained with their children and their children’s adoptive families. Amberly, who at one time lived just miles from her son’s adoptive parents, was able to be a part of his life from the very beginning. Deanna’s first extended visit with her son was in June of 2010, a few months before his first birthday, and she hopes to see him again soon. Leah commemorated her daughter’s birth by having special necklaces made for herself, her daughter, and her daughter’s adoptive mother. After having a joint baby shower with her child’s adoptive parents, Amy spent a great deal of time with the family while attending school in Raleigh and now visits them frequently at their new home in South Carolina.

All of the birthmothers cherish the photographs and letters sent by the adoptive parents and look forward to talking with them on the phone. They feel fortunate to be a part of their children’s lives. At the same time, their own lives have continued — different from before, filled with new challenges, as well as new triumphs. After Deanna Cox made the decision to place her child for adoption, she returned to school, where she earned her first perfect 4.0 semester report card — while giving birth in the middle of the term. This academic success was significant to her, she explained, “because I knew that having a baby and [placing him] for adoption helped me grow into a mature woman and a better student. It made me realize which things in my life were high priorities and which were not.”

While Deanna has never wavered in her decision to place her son for adoption, it was not an easy choice for her to make, and she knows that she still has “a lot of processing and healing to do.” Her advice for other students who are birthparents: “Don’t be afraid of the feelings you have. Some days, you will be completely fine with life and your decision, and other days, you will feel upset and overwhelmed. Not only have you made the biggest decision of your life, but you also did it while you were getting your education! Do what you need to do to celebrate and to vent. Don’t ever be afraid to ask for help. Even the strongest people in the world need support at times.”

This advice is echoed by Leah: “As a birthmom, find support where you can. Locally, it can seem hard to find, but online, there are so many great communities where you can connect with others. I also really encourage counseling because it helps you sort out and deal with emotions as they come up. Having counseling during the first year or two after the adoption really helped me hold on to the peace I have in my decision and get through any issues we’ve come across in our adoption relationship.”

Amy, who has made an effort to connect with birthmothers across the country to form a long-distance support network, believes it is important for birthparents to seek each other out and help one another. “Share your story, help others who are going through what you’ve already been through, and make a difference in someone else’s life,” she said. “As a birthmother myself, I can say that helping other birthmothers has been the ultimate healing tool for me.”

Nicole Callahan was FFL’s first College Outreach Coordinator and later served as Assistant Communications Director for the National Council for Adoption. Adopted as an infant via confidential adoption, she was reunited with her birth family in 2008.