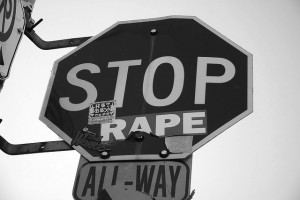 According to the 2008 National Crime Victimization Survey (NCVS) published by the U.S. Department of Justice, nearly 60 percent of all rapes are not reported to the police, which means there is no chance for the perpetrator to be held accountable.2 Women often do not want to go through the process of reliving the story through necessary work with the police. In college, social groups intertwine, friend groups change, and students reinvent their lives. And because of that, the capture and prosecution of the rapist could change the emotional and social structure of the victim’s life.

Many factors discourage college victims from coming forward. Having to relive the event through the process of prosecution, splitting social groups into those who believe and those who don’t, and a culture that blames the victims all encourage them to stay silent. A 2010 London-based study for The Havens sexual assault referral centers found that 62 percent of victims would not even tell their partner if they were assaulted.5 The study also found that the majority of victims did not report the assault to police because of embarrassment and shame.6 Another 31 percent were afraid of repercussions from the assailant, and 25 percent feared that family members would find out about the assault.7 Instead of family members being the first confidants, these women fear that their families will find out. Some victims further explained why they would not report an assault to the police:

“I would be afraid of being demoralized by the police and society during court proceedings; why bother when they are just going to get off the charges anyway?”

“I am not sure whether I would be taken seriously and the follow-through procedure would be thorough.”

Because most women are not reporting assaults to the police, telling family, or even confiding in their partners, perpetrators not only go unpunished, but victims do not receive the support they need.

Women are often told the best way to avoid sexual assault is to guard themselves from strangers. Taking self-defense classes, carrying pepper spray, checking cars before entering them, and not walking alone at night are helpful short-term tips. It is always good to be aware of the most common ways strangers assault people. However, the use of these tips alone as “assault prevention” is a part of a much larger rape culture that emphasizes and blames the actions of the victim.

A vivid example of rape culture on college campuses is the chanting of the Yale fraternity Delta Kappa Epsilon in 2010. Pledges were blindfolded, led through mostly freshmen women’s housing, and told to chant phrases such as, “No means yes! Yes means anal!”9 Leaders of the fraternity later apologized for the “lapse in judgment,” while the Women’s Center called the act “hate speech” and “an active call for sexual violence.”10 DKE was eventually banned from recruiting new members for five years. Federal law prohibits punishment of individual students from being disclosed.11 While the University reprimanded the students, the ease with which the DKE leaders dismissed the act as nothing more than a “lapse in judgment” highlights the perpetuation of a rape culture on college campuses. A study completed by the National Institute of Justice in 2000 suggested that “the percentage of completed or attempted rape victimization among women in higher educational institutions might climb to between one-fifth and one-quarter” over the course of a college career.12

When women are criticized for letting their guard down, for dressing up, or for drinking alcohol, it creates a double standard that favors not only men, but perpetrators as well. Women, unlike men, are forced to live in a state of fear where they are made to feel at least partially responsible for the acts other people do to them. The Havens study also found that women are more likely than men to think victims should take responsibility for their assault, and women ages 18-24 are, of all female age groups, the most likely to believe the victim is responsible.13 This means that women, more than men, blame women for being victims. A 2007 article reported that there is “a pervasive tendency among persons who have encountered negative, unexpected events as diverse as [sexual assault], spinal cord injury, and traumatic loss of a spouse or child to blame themselves.”14 Victims often believe it’s their fault, and society at large is reinforcing that unfounded guilt in sexual assault cases.

Furthermore, the article states, “Victimized college women are up to 2 times more likely than non-victims to be re-victimized during a single academic quarter.”15 Not only are victimized women more likely to be assaulted again, but repeat predators account for nine out of 10 assaults on college campuses.16

While knowingly putting oneself in a risky situation might increase the chances of an assault, the perpetrator is still responsible for the act. Laws attempt to punish assailants, but they cannot reverse cultural beliefs.

Every 2.5 minutes, a perpetrator sexually assaults a woman,17 and females ages 16-19 are four times more likely to be the victims of sexual assault or rape than the general population.18 Instead of blaming women, society should denounce the perpetrator and support the victims.

Points with Purpose, a project of celebrity artist David Ilan, is an example of a way sexual assault survivors can share their stories in a safe context. Points with Purpose employs the artistic technique of pointillism, in which dots are used to create larger images. Ilan adds one dot to his image for each survivor or supporter of survivors who signs up at pointswithpurpose.com. These dots will combine to depict a woman who is “confident, proud, and beautiful.”19 While the site does not provide counseling, it does provide survivors the opportunity to anonymously share their stories and journey with others who are struggling, or have struggled, with sexual violence, or who simply wish to support victims of sexual violence.

Students can also act to change the local culture so women can come forward and get help with their assaults. Take Back the Night encourages survivors to “Shatter the Silence”20 by posting their stories on takebackthenight.org. They also encourage students to organize rallies, walks, and candlelight vigils on college campuses to “take back the night”21 from fear.

Students wishing to change campus policy regarding sexual assault can utilize resources from SAFER, Students Active for Ending Rape, at safercampus.org to inform college administrators and encourage official sexual assault policy reform. SAFER can guide students in how to make changes to university policies so that women are protected and the campus is responsive to the needs of victims.

4. Bureau of Justice Statistics. Sex Offenders and Offenders. US Department of Justice, 2002.