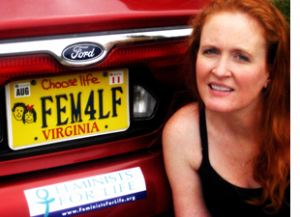 “I caught the wave of feminism in college but felt distant when abortion was included. The ‘Herstory’ articles in The American Feminist® assure me that my place as a pro-life feminist is neither new nor solitary.” Jaclyn Orozco, Wisconsin

“…I was so grateful to learn about a group who believed that ‘feminist’ didn’t automatically mean ‘pro-choice.’” Kelly Shealer, Maryland

“For the first time, I thought of unexpected pregnancy (and honestly, babies in general) as something positive, something to be happy about. I never realized how much I had been encouraged to think of pregnancy — even a planned one — as something that would ruin your life.” Katie Chowdhury, Quebec

“[D]uring a Roe v. Wade anniversary commemoration in high school, I read FFL’s literature. This organization was being radical for the right reasons: life for the unborn and the woman.” Elizabeth Musser, Ohio

“One day, a curtain was raised from my eyes. I was not ASKED if I believe a woman has a right to choose (of course she does); I was being asked if I believed we have a right to end another person’s life. I immediately said, ‘No, we don’t.’” Monica, California

“I heard about FFL at a babies playgroup. [As FFL Honorary Chair Patricia Heaton says,] unplanned pregnancy could mean unplanned joy. It was the exact opposite of what I was hearing in this culture.” Janet Moncada McAdoo, New York

“FFL’s ultimate secret weapon is a mirror which it holds up to the woman’s face so she can see for herself what a strong woman looks like!” A Supporter, Illinois

“One day, teaching my biology classes life traits and human chromosomes, I admitted what I’d always known: that an embryo is alive and a human, right from conception.” Kathryn Lykins, Georgia

“When I first realized that my mother was a teenager when I was born, I wondered if she’d thought about abortion. She said, ‘Never.’ That’s when I decided I would always be pro-life. People asked me if I ever felt like a mistake. I have always felt like a special gift to her and my dad.” Rebecca Eaker, United States

“As a medical student in the late ’80s, I assisted in the emergency room with a patient undergoing a miscarriage at 14 weeks. The tiny fetus was delivered entire, and the heart was visibly beating for some time. At that instant, I knew that abortion was wrong, and as a resident, I refused to participate in terminations of pregnancy. FFL and the principle that Women Deserve Better® I support wholeheartedly.” S.W., United States 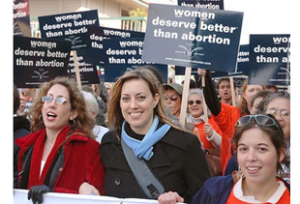 “I’ve been there. I’ve seen the unexpected positive on the pregnancy test. I’ve fallen in love with the ‘lima bean’ on the sonogram. I’ve sat, terrified, telling my family. I’ve seen the difference support makes. Having my son is the best thing I’ve done, but I so easily could have missed out. Choosing adoption was hard, but my sweet boy is happy, healthy, and loved… and I’m an active part of that. I wouldn’t want less for anyone.” Britney Parcher, Texas

“It became personal when I discovered I was conceived out of wedlock. My father’s first suggestion was an illegal abortion. I will always be grateful that my mother chose to give me life and that he chose to marry her and be a real father to me.” K.G., Washington

“I love that FFL sponsors programs and education so pregnant women don’t have to sacrifice a child or education and dreams. With resources and support, a woman can choose both.” T.J. Bellafiore, California

“Encouraging young women with an unplanned pregnancy to parenthood or adoption has more credibility because of my own adoptions and my membership in FFL. I want to fully support my children’s birthmothers’ brave decisions.” Brandon Fredenburg, Texas

“Pregnancy can stand in others’ way of getting what they want from a woman. She might no longer be a model employee, sexy girlfriend, dutiful wife, fun friend, or perfect daughter. Women are often subtly coerced into abortion by people who withhold support or manipulate them.” Julia Phillips, Kentucky

“The key question is not about abortion laws but rather, ‘How we are going to welcome children into this world?’ FFL understands that and works to respond to it.” Rev. Andy Cribben, Wisconsin

“In 1987, I was newly sober, 34 years old, and pregnant and did not really feel like I had any ‘choice’ but abortion. I did not have the resources to raise a child, to tell my parents, or to adopt. I had no counseling. I just asked the doctor without blinking an eye, ‘How do I get an abortion?’ It was a nightmare experience and would later form my belief in the sanctity of life.” S.F., Washington

“I am a childless mother. Pregnant during my first semester at college, I went home. They suggested abortion, but I did not tell them that I had specifically come to them because I did not want that. Afterwards, I could not cry for five years. Now, 43 years later, I still miss her. I am a Feminist for Life because I know how much abortion hurts.” J.R., Massachusetts

“Young men think abortion is a non-issue for them, since it is a woman’s choice…. After reading the FFL approach, I was able to help these young men connect with the plight of women, based on the reasons why women have abortions. With newfound compassion about how abortion hurts women’s present and future relationships with men, they can more readily see their own role.” Dn. Joseph Stickney, Arizona

“While a devout church member, I didn’t want a religious group in my fight against abortion. Many pro-life people support capital punishment. I don’t. Euthanasia? Not. Violence against women (or men): not acceptable. Women’s Lib sounded good: equal pay, equal partnership, equal opportunity. Susan B. got it right. So does FFL — Efficient!” Jean Ver Hoeven, New Jersey

“Protection of life can best be accomplished when both mother and child are cherished, supported, and served. Your approach avoids the traps of ideological extremism and puts service to real people with real needs above political agendas and divisiveness.” Jim DiPeso, Washington

“FFL is a strong, passionate advocate for women and children in ways that are creative, constructive, and respectful. We are bridge-builders.” Gerry Rohrkemper, California

“I applaud all of you for your devoted intelligent outreach and refreshing approach. May you reach innumerable hearts and minds for many years to come.” Mary Lou (80 years old), Florida

“Alongside the original feminists who fought to give women a voice, guard children with sound labor laws, secure the abolition of slavery, and protect the unborn child, women today increasingly stand in solidarity with FFL to defend ALL those whose voice is not heard.” Rachel Medefind, California

“I love the way this organization breaks the mold!” Gina Merritt, Illinois

“FFL builds coalitions and lobbies for legislation that meets the needs of pregnant and parenting women, decreasing the pressure for abortion. Susan B. Anthony would be proud!” Sharon Soderlund, Minnesota

“Being a feminist included being ‘pro-choice.’ As I was against abortion, I thought that I could not call myself feminist. In Feminists for Life, I was very glad to find people who think like me. There, I learned that even the first feminists were against abortion.” Claudia Witt, Germany