On the fortieth anniversary of the Roe v. Wade decision legalizing abortion, many will focus on the undeniable humanity of the unborn child now seen clearly by millions through sophisticated sonograms shared by proud parents eagerly awaiting the birth of their children.

It is also a good time to evaluate the impact of the choice made by attorney Sarah Weddington in 1973 on women. 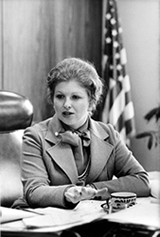 As her arguments for abortion before the Supreme Court made clear, Weddington saw the discrimination and other injustices faced by pregnant women. But she did not demand that these injustices be remedied. Instead, she demanded for women the “right” to submit to these injustices by destroying their pregnancies. Weddington rightly pointed out the unmet needs of students: “…there are many schools where a woman is forced to quit if she becomes pregnant.” But Weddington didn’t argue against pregnancy discrimination or even for alternate solutions for a pregnant student.

For women with serious medical needs, she further noted: “There is no duty for employers to rehire women if they must drop out to carry a pregnancy to term. And, of course, this is especially hard on the many women in Texas who are heads of their own households and must provide for their already existing children.”

Weddington clearly saw the bind low-income women face when experiencing unplanned pregnancy: “At the same time, she can get no welfare to help her at a time when she has no unemployment compensation, and she’s not eligible for any help in getting a job to provide for herself.”

What if Weddington had used her legal acumen to challenge the system and address women’s needs?

By accepting pregnancy discrimination in school and workplace and the lack of support in society for pregnant women and parents, especially the poor, Weddington and the Supreme Court betrayed women and undermined the support women need and deserve.

Since then, millions of women have paid the price, struggling in school and the workplace without societal support. After all, when “it’s her body, it’s her choice,” it’s her problem.

Here’s the disturbing report card. According to the Guttmacher Institute, the former research arm of Planned Parenthood, the largest provider of abortion in America:

~ 75% say that having a baby would interfere with work, school, or the ability to care for dependents,
~ 75% say they can’t afford a child,
~ 69% are economically disadvantaged,
~ 61% already have at least one child,
~ and 44% of all abortions are performed on college-age women.

Abortion has masked — rather than solved — the problems women face.

Similarly, we must ramp up efforts to systemically address the unmet needs of struggling parents, birthparents, and victims of domestic violence and sexual assault.

This anniversary, thousands of pregnancy care centers, Feminists for Life, and other organizations across the country will continue our efforts to help women so that they don’t feel driven to choose between sacrificing their children or their education and career plans.

Abortion is a reflection that we have not met the needs of women.

Forty years after Weddington capitulated to inherently unfair practices against pregnant and parenting women, those on both sides of the abortion debate should unite and say “no” to the status quo. Clearly, women deserve better.

Serrin’s opinion editorial was published by the Washington Examiner on Friday, January 25, in observance of the annual March for Life.

Serrin M. Foster is President of Feminists for Life of America based in Alexandria, Virginia. She is the creator of the Women Deserve Better® than Abortion campaign. Her landmark speech, “The Feminist Case Against Abortion,” was named one of the “Great Speeches in History” in the anthology called Women’s Rights.