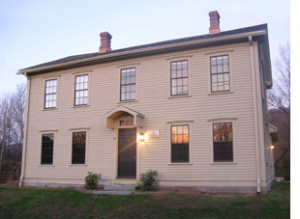 It was the summer of 2006. When I received a call from Feminists for Life’s national office. We had received a postcard from a realtor: “Susan B. Anthony’s birthplace is for sale!” I knew immediately whom to call: Carol Crossed.

Carol Crossed lives in Rochester, New York, where Susan B. Anthony lived and died before her most cherished dream of women’s suffrage was realized. Carol had toured Anthony’s Rochester home many times, and she immediately grasped the historical significance of preserving the home where Anthony was born in Adams, Massachusetts.

It wouldn’t consume her life, Carol promised her husband Dick, when they discussed the purchase of the house.

That promise would prove difficult to keep.

Carol had only seen the house from the outside. Perhaps it was fortunate that she wasn’t able to enter the home before plunking down the one and only bid at auction.

Despite the dilapidated state of the house, we couldn’t help but feel as though we were walking on hallowed ground. Together, we wandered through a home that had housed many generations since textile factory owner Daniel Anthony first built it in 1818, installing his general store on the first floor. The march of time and people through the home was evident. “Modern conveniences” introduced over time had undermined the simple beauty of the Federal-style home. The old hearth in the kitchen that once warmed the Anthony family had been torn out and replaced with a full bath in the latter half of the 20th century. The only sections of the house that remained in their original condition were the basement, with exposed rock in the foundation, and the attic three stories above with handcrafted crooked chimneys, where up to eleven girls and young women who worked at Daniel Anthony’s factory used to sleep.

For the next three and a half years, Carol and other museum supporters poured heart and soul — and an additional $650,000 — into restoring the house. When I revisited the Susan B. Anthony Birthplace Museum for its grand opening in February 2010, their hard work could be seen everywhere I looked. A new roof had been completed, with two restored chimneys. Two new furnaces had been installed. Windows edged in black accented the bone-colored exterior of the house. Original pine floors and new supports for beams, previously undermined by an invasion of hungry termites, had been revealed. 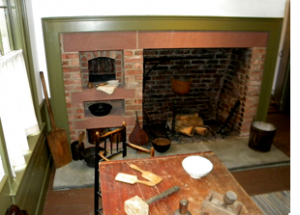 The south-facing front parlor where Susan B. Anthony was born is now filled with period furniture typical to Quaker homes of the day. The front left room is once again a general store. Cross sections of paint chips examined under a microscope revealed a great surprise: four complementary shades of green used for the trim throughout the house, along with pigment-free white and three colors of brown on the floors. One of the rooms off the kitchen is dedicated to showing how the house was constructed, including a view of the slats inside the wall that make up the “bones” for the house. An enormous fireplace and hearth have once again become the centerpiece of the kitchen, complete with a bread oven to the side, as described in the first volume of Ida Husted Harper’s The Life and Work of Susan B. Anthony. 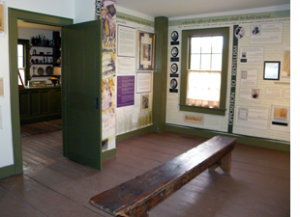 The back left room of the house has become “the Legacy Room.” Visitors to the museum should plan on spending some time in this room, where Susan B. Anthony Birthplace Museum board members Lynn Lewandowski and Colleen Spellecy carefully, lovingly, and thoughtfully crafted a timeline of Susan B. Anthony’s life. They dedicated one wall after another to her many efforts — abolition, suffrage, and temperance — including excerpts from her newspaper The Revolution against “Restellism,” a term of the day referring to both abortifacients and surgical abortions. One wall is dominated by a display case filled with cherished treasures from the suffrage era. The Legacy Room is a powerful testament to the tireless advocacy efforts of this extraordinary suffragist.

Excitement over the new museum was palpable at the ribbon-cutting ceremony on February 14, 2010, the eve of Susan B. Anthony’s 190th birthday. As assembled guests and museum supporters waited for the ceremony to begin, we congregated in the adjacent gift shop filled with carefully selected items, including Susan B. Anthony dolls and exquisite handmade quilts that celebrate Anthony’s life and women’s suffrage by local fabric artist Kathy Williamson. Numerous books on Anthony’s contributions — along with ProLife Feminism: Yesterday and Today and some of Feminists for Life’s Covetable StuffSM — grace the shelves.

Visitors and guests came primarily from Feminists Choosing Life, formerly FFL of New York (based in Rochester), and from across Massachusetts. Dr. Mildred Jefferson (see page 14) was among the latter. The visitor who traveled farthest to attend the ceremony was Mary Krane Derr, the Chicago-based historian who, while teaching women’s history, has perhaps done most to uncover the truth about the early American suffragists’ opposition to abortion. 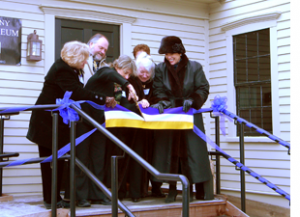 FFL Vice President Sally Winn acted as master of ceremonies at a later celebration at the Adams Library. A descendant of Daniel Anthony, Eric Anthony, and his wife Patricia provided period music. Twelve-year old Gabriella Holland delighted the crowd with a dramatization of Susan B. Anthony’s life. Sally led a round of “Happy Birthday,” and a day of joyous festivities concluded with birthday cake in the Susan B. Anthony Room. 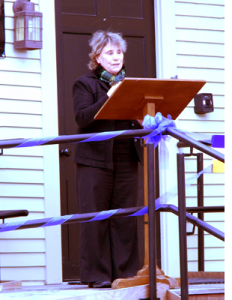 During the celebration, Carol’s husband Dick — along with their children and grandchildren — beamed with pride for Carol’s accomplishment. The day felt victorious. My cheeks hurt from smiling. Yours will, too, when you visit Susie B’s birthplace.

It is impossible to underestimate the passion and dedication of Carol, the Board of Directors, and the volunteer team at the museum. Thanks to their years of work and sacrifice to reveal the way Susan B. Anthony and her family lived in the home of her birth, we can better understand and appreciate her legacy today. The restoration of the Susan B. Anthony Birthplace Museum is a gift for many generations to come.

Brava, Carol. You and your team have earned a standing ovation, and in the tradition of Susan’s day, we wave our handkerchiefs in applause. You are indeed remarkable!

FFL Vice President Sally Winn served as the first Executive Director of the Susan B. Anthony Birthplace Museum when it opened.