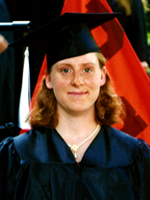 Like many college students, I wanted to move away from home and experience life on my own. I chose to move 1,100 miles away, and I ended up working two jobs and surviving on financial aid to support this dream. One of my jobs was at a restaurant.

A cook in the restaurant started to show some favoritism towards me. The other servers were annoyed as my orders came out faster and better and my tips increased. I didn’t think much of it, until I was pushed inside a freezer and the cook made sexual advances towards me. No matter the number of times I broke free, it happened again.

Later that night, he raped me.

For the next several weeks, I tried just to keep my life barely intact and my classes at a passing level. About two months later, I went to my on-campus health center for a check-up. I asked the nurse if I was pregnant. She assured me I wasn’t and kept telling me the test would be negative. I wanted to believe in her confidence, but I had this nagging feeling that I was pregnant.

The clock ticked mercilessly, as I thought: “I don’t know how to take care of a baby! I’m not ready to be a mother; I don’t have medical coverage. I can’t do this now!” The nurse came back in a state of quiet shock and placed the positive test in front of me. I begged her to tell me what to do. She told me to take a prenatal vitamin, find a doctor, and be on my way. That was it.

I walked out in a daze. Was the cook this baby’s dad? Some jerk who hurt me, for fun, in spiteful laughter, as he, when he was done, said, “See ya ’round, bitch”? Could that moment, in all its ugliness, possibly have fostered a child?

Or did this baby belong to me and to my boyfriend, whom I loved deeply, who had been with me in loving times and fun-filled moments?

I had to wait until the birth to know.

Despair came in fast and furious. Either way seemed a dead end. Surely, either way was hard. Did I think about abortion? Sure. I wanted so badly for the pain to go away, the unknowing, but even abortion wouldn’t put the question of paternity to an end.

And I still didn’t know what to do. I was in a new town, no family, few friends close by, no health insurance, and not a clue how to take care of myself during pregnancy.

One day, during a desperate call to a friend from home, I went over my so-called choices. She made a comment to me, “I know you are feeling overwhelmed with sadness and pain and despair right now, but just know, no single feeling lasts forever. An abortion will.” That hit me like a ton of bricks.

Upon deeper reflection, I realized that while I did not know who the father of my baby was yet, I did know who his mother was. And that was me. There was as much of me inside this baby as there was the rapist, or my boyfriend. How could I allow yet another piece of me to be taken away?

I didn’t have much. But I had enough.

So, I moved back home and had my baby boy. My boyfriend didn’t sign the paternity papers at the birth because he still didn’t know if he was the father, and his friends and family encouraged him not to. It would take three months to learn who the dad was. But it didn’t matter to me anymore, at least not as much. In my son’s tender eyes and hands, I saw that part of me: fragile, needing love and support, but also full of life.

To learn later that women like Susan B. Anthony and Elizabeth Cady Stanton celebrated motherhood as a part of womanhood was very empowering. I was not going to be transformed from a woman to a mother; rather, my experience of womanhood was expanding, enhanced by motherhood.

When I chose single motherhood, it was hard. Finding resources and returning to my hometown college were challenging. But I persevered through it all and tapped into a strength within myself I never knew I had. We, as women, can sell ourselves short sometimes. Some parts of society will tell us we can’t do it, we shouldn’t do it, or force us to choose between our dreams as women and our desires as mothers.

But I am here to tell you, women deserve better® choices than that.