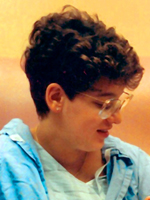 In 1991, I was 23 and working in the Genetics Department at Children’s Hospital of Philadelphia. I was married, had a toddler, and was happily pregnant with my second child. What a gift it was that I was working in that department. Because of the knowledge and connections made there, I was in a much better state of mind to deal with what lay ahead.

At about 20 weeks gestation, an ultrasound picked up abnormalities in the infant I was carrying. Sadly, major brain and heart defects were noted.

The obstetrician and the head of the Genetics Department were direct with me about having amniocentesis, suggesting to me that if I knew what the chromosomal abnormality was, I would lean more toward abortion. They didn’t know how firmly I stood behind my statement that I would not add “premature birth to the list of problems my daughter was already facing” by undergoing an abortion.

However, I did choose to have amniocentesis. There are many chromosomal abnormalities that can be detected by amniocentesis—not just Down syndrome. Some of them are “incompatible with life outside the womb.” That was the case with my daughter. She had Trisomy 13 which is similar to Down syndrome (Trisomy 21) in that there is an entire extra chromosome. However, unlike Down syndrome, which has an array of associated clinical pictures, people with Trisomy 13 do not have an expected life span. Many die even before birth.

With the information I had from the amniocentesis, I was able to prepare for the birth of my child. I was able to read up on the problems she might have if she did survive until and after her birth. And, most importantly, I was able to meet with a priest who was a university ethicist to discuss which medical interventions should be considered when she was born. For example, CPR is a life-saving measure but in some instances, such as when someone is in the final stages of dying, CPR may not be chosen as a medical intervention. In my situation, with my daughter Gabrielle having a known chromosomal abnormality, I was prepared in the delivery room, should she not be able to breathe, to decline intubation, but to ask for resuscitation by means of breathing into her mouth/nose in infant CPR.

Gabrielle lived for 12 days and died in my arms at home. Hospice services were a wonderful resource as my husband and I learned to change her feeding tube and prepare for her death.

Over the years, my gratitude for being chosen to be Gabrielle’s mother has changed and grown. I have gained ever-deepening understanding of the privileged position I am in for having her as a daughter. When well-meaning doctors and medical personnel try to influence women to abort their babies with major medical issues, the parents may give in to that pressure and miss out on the experience of getting to know that child. Parents should know that even babies with chromosomal abnormalities can find a home through adoption if they don’t feel capable of parenting a child with special needs. Whether they choose adoption or take care of the child themselves, there are supports to help families in their situation. Parents should know about all of those resources before being put in the difficult position of considering abortion. With time taken to learn about resources, perhaps someday in the future they will look back and feel privileged to be that child’s parent.

Diane Simoni is the proud mother of two grown children and works as a clinical social worker in private practice.