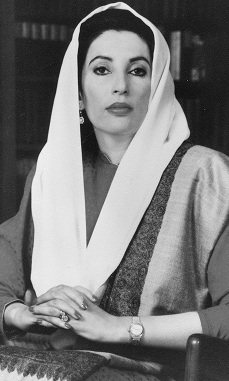 Feminists for Life of America President Serrin Foster remembered the contributions of the late Pakistani Prime Minister Benazir Bhutto as an international advocate for women and children, born and unborn, especially those in developing countries.

“A pro-life feminist, Bhutto consistently promoted a holistic approach to addressing the needs of women by emphasizing the empowerment of women,” said Foster. “Bhutto urged world leaders to address health issues including increased nutrition and immunizations. She advocated the protection of women from domestic violence and war. And she connected the need for education of girls and women to their ability to work, and a woman’s ability to work as essential to achieving economic independence.”

“Bhutto also refused to choose between meeting the needs of women or between protecting unborn children from abortion,” Foster said. Bhutto called the common practice of gender selected abortions “tragic” and said it “still haunts a world we regard as modern and civilized.”

Bhutto defined empowerment as “the right to be independent; to be educated; to have choices in life. Empowerment is the right to have the opportunity to select a productive career; to own property; to participate in business; to flourish in the market place. We must shape a world free from exploitation and maltreatment of women. A world in which women have opportunities to rise to the highest level in politics, business, diplomacy, and other spheres of life.”

Foster recalled Bhutto’s focus on women-centered solutions and opposition to the exportation of abortion to developing countries when she addressed a thousand delegates at the 1995 U.S. Department of State “Bringing Cairo Home” conference. Foster drew parallels between the obstacles faced by the early American feminists and the needs of women in developing countries as we approached the 21st century.

Bhutto’s solutions also echoed those of the great feminist organizer, Susan B. Anthony, who advocated women’s rights, and who urged society to address the root causes that lead women to abortion,” Foster said while reflecting on the many contributions of Benazir Bhutto.

“While separated by time and space, Susan B. Anthony and Benazir Bhutto both understood the need to address the lack of support and resources for women, and our responsibility as a society to work together to eradicate these causes,” Foster said.

An excerpt of Bhutto’s speech delivered to the U.N. Fourth World Conference on Women in Beijing, China, was included in an anthology on “Women’s Rights” one in a series entitled “Great Speeches in History,” along with those by pro-life feminists Susan B. Anthony, Elizabeth Cady Stanton; 70’s women’s movement leaders Betty Friedan, Gloria Steinem, Sarah Weddington; and contemporary women leaders including former president of NARAL Kate Michelman, Senator Hillary Rodham Clinton and Feminists for Life President Serrin Foster.

Bhutto, who was assassinated on December 27th after returning to Pakistan to champion democracy said, “I dream of a Pakistan, of an Asia, of a world, where we can commit our social resources to the development of human life and not to its destruction. That dream is far from the reality we endure.”

In 1998, Feminists for Life recognized then-Prime Minister Benazir Bhutto among Remarkable Pro-Life Women® for her advocacy of women and children around the world.