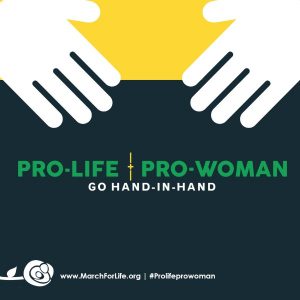 Every time you hear “Women Deserve Better,” “Refuse to Choose,” pro-life feminist quotes originally researched and revealed by FFL, and increasingly woman-centered solutions, pat yourself on the back.

You are the ones who believed in Feminists for Life’s pro-woman, pro-life message and solutions and who have invested to get the word out about the need to invest in college outreach, the poor and vulnerable populations. So let me give you the credit you deserve.

Although not new to you or me, Cosmopolitan recognizes the results of our efforts by writing, “the brewing blizzard didn’t dampen the enthusiasm of the roughly 10,000 remaining marchers who walked the streets of D.C. declaring “pro-life and pro-women go hand in hand,” a new message from the anti-abortion movement meant to recast opposition to legal abortion as a feminist issue.”

Our message is being heard more and more — and is being repeated.

Some of it is good news. Others will make you sigh. Between the two we know we are succeeding but we have so much more to do. March forth!

•In the Herald Scotland, “Organisations like Feminists for Life, in America, and the much earlier Women for Life, in the UK (not the genuinely reactionary Women for Life International), have argued that current abortion policy underwrites the poor conditions and low status of mothers, especially poor and single mothers, and is a cheap substitute for radical reform. Indeed, poverty and prejudice are often used as arguments for abortion.”