When visitors tour Cambridge and stroll across the horseshoe-shaped former grounds of Radcliffe College in Cambridge, Massachusetts, little do many realize they are steps away from some of the most treasured items documenting women’s history: precious handwritten letters from Susan B. Anthony to a young friend, Alice Paul’s letter to her mother after her release from prison, Amelia Earhart’s baby book — and so much more. There are drawers filled with suffrage memorabilia, including exquisite pins. This women’s history collection is considered by many to be the most prestigious.

And now, as Feminists for Life approaches our 40th anniversary in 2012, we are preparing to make our own contribution. FFL was nominated for inclusion by the late Dr. Mildred Jefferson, whom we honored in the latest issue of The American Feminist, “FFL Activists Change Campus, Change the World.” FFL’s Board of Directors had the opportunity last spring to tour the Arthur and Elizabeth Schlesinger Library on the History of Women in America, which is now part of Harvard University.

I now invite you to “tour” the library through the eyes of Jane Rohan, who visited with the Board and contributed an article to commemorate the occasion.

As Women’s History Month comes to a close, remember that you and I write the next chapter. Student activists who are hosting FFL events on campus and moving forward with revolutionary, woman-centered solutions play a vital role. Susan B. Anthony still speaks to us today.

Dear Young Friend,
The best service you can give in return for this moment of mine is that you will study the great principles of justice and equality to women and work to establish them in the Constitutions of state and nation — The ballot only can secure equal rights and equal chances.
Respectfully yours,
Susan B. Anthony 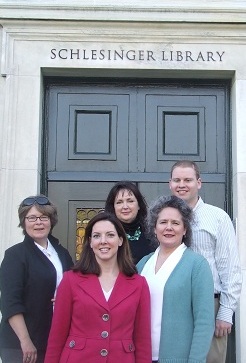 Keep the revolution alive. March forth!