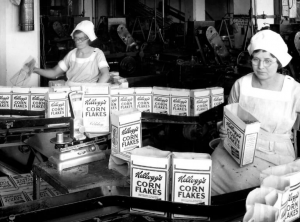 Seeking a balance between paid work and family life through alternative work schedules is not a new idea, nor are alternatives to eight-hour workdays and forty-hour workweeks necessarily limited to white-collar jobs. At the end of 1930, just after the start of the Great Depression, the Kellogg’s cereal plant in Battle Creek, Michigan, replaced its three eight-hour shifts per day with four six-hour shifts. Founder W.K. Kellogg and Kellogg’s president Lewis J. Brown hoped to achieve several goals at the same time: to reduce unemployment in the community, to increase worker efficiency, and to provide employees “greater opportunity for recreation and enjoyment — outside of business hours,” which would “mean better living and working conditions generally.”1 As Brown summed up their holistic approach, “There is nothing more valuable to the industries of Battle Creek than to be able to draw its workers from a community where good homes predominate.”

Kellogg’s six-hour shift initiative won immediate support from President Hoover’s Emergency Committee for Employment, publications such as Business Week and Forbes, the American Federation of Labor, the Harvard Graduate School of Business Administration, and — most important — Kellogg’s workers themselves.

Most of the hundreds of employees interviewed about it supported the six-hour day. They reported having more time for family, friends, and a variety of group and individual activities — including home improvement projects, farming and gardening, caring for sick relatives, hunting and fishing, canning and crocheting, visiting with neighbors, volunteering with religious communities, participating in amateur sports, playing and teaching music, reading to their children, taking career development classes, spending time appreciating nature, and even, in the case of at least one woman, learning to fly a plane.

As health increased among workers, fatigue and accidents decreased. “Kellogg Couples” were more likely to share housework chores, such as washing and ironing, dividing tasks between themselves in new ways. Employees who worked six-hour shifts were committed to their work for Kellogg’s and viewed work at the factory as a means to support their own culture and lives, not the other way around.

Paula Swan, president of Local No. 3 in Battle Creek, recruited her sons in her canning activities, an experience that gave the boys a chance to “[open] up to talk freely.” She appreciated the opportunity to teach them discipline, responsibility, and confidence through the multi-step craft, saying that in those moments, “we were most a family.”

One Kellogg’s employee wrote that his six-hour shift “let Dad be with four boys at ages when it was important.” Another, Leroy Despins, recalled building a house with his wife: “It was downright fun, making something…. She’d read [the blueprints], and we’d both do the work… building, it was peaceful and rewarding — something my wife and I could do together.” Of forty-hour weeks, he said, “It’s work, work, work for everybody. Nobody has any time anymore to do anything — to even be with the kids.”

A 1932 worker-opinion survey by the Women’s Bureau of the U.S. Department of Labor concluded,

“[L]ittle dissatisfaction with lower earnings resulting from the decrease in hours was expressed [by female workers], although in the majority of cases very real decreases had resulted.” Plant-wide votes in the 1930s and ’40s also showed clear majorities of male workers in favor of the six-hour day. Workers of both sexes, when interviewed by Benjamin Hunnicutt several decades later, recalled almost total worker support for six-hour shifts at the Battle Creek factory.

After World War II, however, new management began to push for an eight-hour day, and workers became increasingly divided as management made new shifts be available to all “those who want it.” They offered benefits to senior workers willing to advocate longer hours and offered to increase hourly wages if the union would give up shorter hours. Senior men in skilled crafts and eight-hour workers sneered, “Six hours is not normal for a man,” claiming that the six-hour day was “women’s work” for “girls’ departments,” “weak girls,” “lazy, sissy men,” “married ladies,” “silly girls,” and “housewives” who were “unrealistic.” Men were told that “the women didn’t understand work and how important a job is.” Some characterized men who shared household duties as “taking orders from women.”

“Educational” tactics like shaming were designed to change the culture among workers and were remarkably effective. One man who began working at Kellogg’s in 1936 reported that, at the time, he “really welcomed the time away from work,” but later characterized that attitude as young and foolish, tellingly concluding, “I learned six hours a day was not enough.” Finally, in the mid-1980s, Kellogg’s threatened to move jobs out of state if the remaining six-hour departments would not switch to eight hours. Workers who still loved their six-hour days held a funeral eulogizing the shorter shift.

In 2008, the Families and Work Institute found that American employees spend 42 hours per week in paid and unpaid work time at their main job. The majority of wage and salaried employees, both female and male, said they would prefer to work fewer hours.2 They felt increasingly deprived of time for themselves and for important people in their lives. Three out of four employed parents felt they didn’t have enough time to spend with their children; 64 percent of employees in couple relationships felt they didn’t have enough time with their husbands, wives, or partners; and 61 percent of all employees felt they didn’t have enough time for themselves. Employees often feel that they have to choose between job advancement and devoting attention to their families or personal life and fear they are less likely to advance in their jobs or careers if they seek flexibility in order to meet personal or family needs.3

Creative, flexible employee policies that allow for a better balance between job and family life are the marks of a truly successful workplace. Kellogg’s commitment to its workers was reciprocated by employees who were able to give their best on the job without sacrificing time with their families and community. Though Kellogg’s six-hour day is a thing of the past that few can now remember, many of today’s advocates consider it an innovation that was clearly ahead of its time.