Feminists for Life of America recognizes that abortion is a reflection that our society has failed to meet the needs of women. We are dedicated to systematically eliminating the root causes that drive women to abortion-primarily lack of practical resources and support-through holistic, woman-centered solutions. Women deserve better than abortion.

The following are highlights of our recent work for women and children, made possible by the sacrifice of our dedicated members and generous donors.

Thanks to a very special donor for leading a challenge match, FFL has been able to provide lawmakers, their staffs, and student activists with “Pro-Woman Answers to Pro-Choice Questions,TM” including talking points and a “Birthmothers Deserve Better” article, as well as our recently updated “Voices of Our Feminist Foremothers,” “You Have Better Choices,” and our basic philosophical brochure. To date, FFL has distributed 14,000 kits across the country!

At the invitation of Vermont Right to Life Committee, Serrin presented her landmark speech, “The Feminist Case Against Abortion” at the Vermont State House for the Roe v.Wade Anniversary.. During her address, Serrin advocated for legislation to protect rape survivors (both mother and child) from rapists who seek custody or visitation.

Twenty years after a coalition meeting to pass the Violence Against Women Act, when Serrin first addressed the need to legally protect mothers and children conceived during sexual assault from rapists seeking visitation and custody, half of the states have enacted such laws. 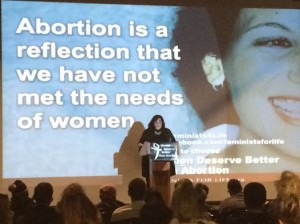 A year after her first lectures at Wofford University and Converse College in Spartanburg, SC, Serrin returned to moderate the first ever back-to-back FFL Pregnancy Resource Forums. Each panel, comprised of professors from both schools, arrived at joint solutions for students on both campuses. 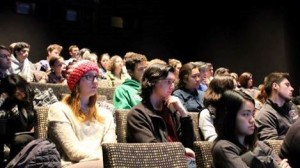 Pepperdine’s Dean of Student Affairs reported they now have scholarships to house mothers and their children! (Serrin moderated an FFL Pregnancy Resource Forum there years ago, and efforts continue!)

Sally also revisited the Susan B. Anthony Birthplace Museum in Adams, MA, which has been beautifully restored by owner Carol Crossed.

Joyce McCauley-Benner presented “Victory over Violence” to students at the College of St. Scholastica (MN), hosted by The Guiding Star. The Guiding Star is a pregnancy resource center serving the poor, students, working parents, and victims of violence. After hearing Sally Winn speak in Duluth several years ago, The Guiding Star’s founder was inspired to put FFL’s principles into practice.

Joyce also addressed six hundred students at UC Berkeley. Another speaker at the same event is a professor who has also performed abortions.  Draped in condoms, he waved a packet of RU-486 abortifacients, saying, “See, just pills!”  Despite overwhelming opposition, Joyce patiently answered questions from an audience surprised to hear from a woman who chose “victory over violence” for herself and her child.

Former College Outreach Program Coordinator Chaunie Brusie addressed students at Seattle University. Now a mother of four and a labor and delivery nurse, Chaunie has published Tiny Blue Lines, about her unplanned pregnancy and pro-life leadership on a Michigan campus; it includes information about FFL’s College Outreach Program. (Seattle University invited Serrin this fall– so FFL was there two semesters in a row!)

With the support of Congressman Christopher Smith’s staff and three bright young interns, we held our Annual Capitol Hill Briefing in July. For the first time, Serrin presented her landmark speech on the Hill. Joyce McCauley-Benner then shared her powerful story of “victory over violence;” Johanna Young, a domestic violence victim who had an abortion, also spoke. Johanna, now a mother of three about to finish college herself, has brought FFL’s program to George Mason University.

Serrin represented FFL at the annual summit of pro-life leaders hosted by Students for Life of America.

To expand the impact of our work on campuses, Serrin announced at Yale that FFL is sharing our Pregnancy Resource Survey, “Tools for Schools,” and map of national resources with Students for Life of America, which has just launched a new national campus directory of resources and support.

Sally spoke at both the DC and San Francisco Students for Life Conferences. Sally led volunteers distributing Women Deserve Better placards at the March for Life in Washington, DC, and joined then-Board Chair Patrick O’Kane at the Walk for Life West Coast with other volunteers.

Serrin presented the keynote address to 900 attendees, including four Catholic bishops, at the Washington State Catholic Cornerstone Conference in October 2014. FFL’s booth was literally mobbed after her address!

Thanks to 40 Days for Life for  sponsoring five FFL “Women Deserve Better® than Abortion” billboards throughout Charleston, South Carolina! 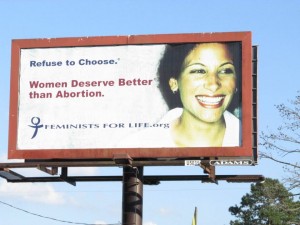 FFL’s Facebook page has grown from 16,000 to over 30,000, but the big news is that it our messages, slogans, feminist history, Q&A, and special series “Birthmothers Deserve Better” have reached well over a MILLION thanks to reader shares, Twitter, and FFL’s website.

There are too many articles and radio interviews about campus events, rallies, and marches – or publicity simply using our “Women Deserve Better” slogan – to detail here. To name but a few:

Serrin’s speech at the Vermont State House was picked up by Associated Press and carried across the country by papers as far away as Texas and California! The event was also covered by NY Television affiliates.

Sally was interviewed by EWTN during the Walk for Life West Coast-her words reached millions!

Serrin and Sally attended the 40 Film premiere in Washington, D.C. Serrin, Joyce, and Jewels were interviewed for this powerful film.

Gov. Mike Huckabee gave Serrin a shout out as a woman he respects on his FOX News show.

Sally was interviewed by the Christian Post for an article addressing the unmet needs of pregnant women.

Serrin wrote a feature article, “Women Deserve Better than Abortion,” for Northwest Catholic magazine, which reaches parishioners in all dioceses in the state of Washington.

Look for Serrin’s speech to be published in a prominent magazine this coming January! 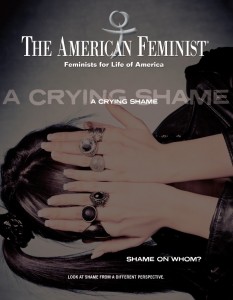 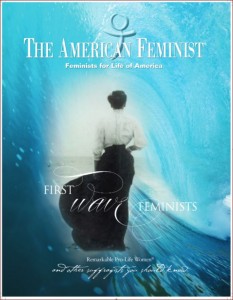 All three of our brochures have been updated this year, including “Voices of Our Feminist Foremothers,” “You Have Better Choices,” and our basic philosophical brochure. They are available for Roe anniversary conferences and to pro-life campus groups. Thanks to our generous donors, we’re able to offer them and many other materials to more than 800 pro-life student groups!

On behalf of the FFL Board of Directors and staff, please accept our heartfelt thanks for your support in 2014. We ask you to reflect on OUR accomplishments and thoughtfully consider your year-end gift and ongoing monthly commitment. (New and increased gifts will be double-matched! Don’t forget corporate matching gifts!) We can’t do this without your help.

In 1870 pro-life feminist Sarah Norton wrote about the tragedy of abortion, ” …Perhaps there will come a time when… an unmarried mother will not be despised because of her motherhood… and when the right of the unborn to be born will not be denied or interfered with.”

That day is coming because of you.