In a day and age when women in the U.S. are fighting for paid maternity leave, women who work for the clothing retailer H&M are fighting to simply keep their job during pregnancy.

Research released by the Asia Floor Alliance calls out Swedish retailer H&M for routinely exploiting workers across India and Cambodia. The report collates interviews with 251 workers in H&M supplier factories and alleges numerous violations of international best practice in labor standards. The survey makes for uncomfortable reading and paints a grim picture of life for the Asian and predominantly female workforce that stitches your cut-price clothing. (Source: Broadly)

This report alleges that “employees from 11 out of 12 factories in Cambodia reported witnessing or experiencing termination of employment during pregnancy. All 50 workers surveyed from Indian supplier factories also told investigators that women were routinely fired from their jobs during pregnancies.

Meanwhile, sexual harassment in the workplace is commonplace — in Cambodia alone, workers from nine out of 12 factories reported experiencing it in their workplaces.”

Because of this, workers, in fear of losing their job, resort to an abortion, oftentimes to one performed in a back alley. Meanwhile, abortion advocates use this as an opportunity to exploit these women, claiming they need “safer” access to abortion when what we know they need is a “safer” place to work so they can thrive. 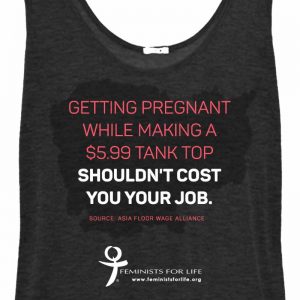 We need to address the root of the issue, which isn’t abortion. The root is the exploitation and dehumanization of women.

In an era where the world community is constantly calling for “women’s rights” and “women’s health care,” it is unconscionable that women are being fired simply for being WOMEN.

This isn’t women’s rights or health care. It is predatory and exploitative, and we won’t sit idly by and be silent. Abortion is never a solution. Ever.

We are asking you to take action with us. H&M recently announced that they are working to improve these dire conditions.

There are three simple things you can do to keep up the pressure on H&M simply by clicking the links in this email:

1) Go to H&M’s Facebook page and ask them to STOP making women choose between motherhood and a job. Women deserve better!

2) Tweet to H&M that “Women deserve better than being fired if they reject the back alley! #CambodiaWorkers #WomenofCambodia”

3) Email H&M and respectfully but strongly ask them to make the necessary changes in their operations so that women are not forced to choose between a job and the back alleys of Cambodia or sacrificing their children. Pregnancy is not a disease, and it shouldn’t be an automatic pink slip either. Women deserve better. Ask H&M to be part of the SOLUTION: providing safe, respectful, and positive places to work for women, and not part of the PROBLEM: contributing to the lie that abortion is an alternative and that women are only valuable when they can work like men.

Together, we can make a difference for women and lend your voice to the women in

PS: When you contact H&M, please let me know so I can thank you.