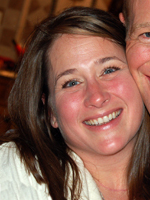 The day started with anticipation. It ended with voices ringing in our ears…”Your baby has a very serious heart defect. We are sorry but nothing can be done to fix it. If he makes it to term, he won’t live more than hours or a few days. We strongly suggest that you consider ending this pregnancy now so that you don’t prolong your suffering.”

My husband Dave and I had been at an appointment for a level two ultrasound, 19 weeks into our first pregnancy; a follow up to some funny results from a blood test, probably nothing to worry about. The world was spinning, collapsing, everything had changed. Life before this day was over and now we were on a new journey…one with no easy road, no real way out.

I wish I could say the decision to continue, to carry this baby with “no hope” was automatic, but that isn’t the truth.

The truth is that I couldn’t imagine any of the options. Early induction was offered and seemed less like “termination” than a surgical abortion. Twenty-one more weeks of planning a birth and a funeral at the same time seemed impossibly painful. There was no way around the pain. I wanted out.

Then, thanks to a kind receptionist, I was connected to a woman who had been given similar news 2 years earlier and had chosen to continue her pregnancy. We spoke on the phone and I heard something that surprised me. Her story was one of love and grief, joy and pain. She spared no details, sharing every aspect of her journey. She didn’t make trite statements or offer spiritual platitudes, but instead extended the hope that there can be beauty mixed with suffering. The decision was made. I think that decision saved my life, not physically, but spiritually.

My doctor was so adamant I terminate that I had to ask if she would continue to be my doctor since I had chosen to carry to term. She agreed, but I could tell it scared her.

I continued to go about my daily life, going to work, to the grocery store. Every day was a choice to move and live. There were two other pregnant women who worked in the same dental office as I did. All three of us were expecting firstborn sons, all due within a 12- week period. I couldn’t avoid the truth; I embraced it and was honest with everyone who asked about the baby. Though I knew it made some people uncomfortable, I couldn’t pretend things were ok.

At 30 weeks, we had another ultrasound and there was a slight improvement in the appearance of our baby’s heart. We saw a pediatric cardiologist who did his best to see our son’s heart anatomy through my belly. The news was still grave, but a glimmer of hope existed. We would have to wait and see.

At 36 ½ weeks, a beautiful boy, Davis Eric, entered the world. I was able to hold him for a moment before the neonatal team whisked him away. My husband, Dave, followed and Davis’ heart defect was officially diagnosed “Hypoplastic Left Heart Syndrome.” A big name for a big problem. Only a few babies survived the 3-part surgery and the best hope was still “a lifetime of looking over your shoulder” as the neonatologist put it.

We had come to a peaceful place of surrender. He was ours for a season, however long, but ultimately he was the Lord’s. We could choose the surgery knowing that our hope was not dependent on our son’s survival.

Davis had surgery on the fifth day of his life. We had held him, loved him, parented him in the ways we could. He survived only a few short hours after surgery. The doctors had done their best, we had done our best, and it was time to let him go. The pain was the deepest ache I have ever experienced. I still feel it sometimes. But this pain does not bear any regrets, any second thoughts, any “if onlys.” This pain doesn’t consume me from the inside out.

We are blessed to now have two daughters, Anna and Grace, both healthy girls and we look back with gratitude and humility on our painful and wonderful journey.