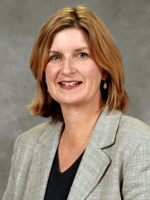 Jeannie Wallace French, executive director of the National Women’s Coalition for Life provided a powerful personal story during the 1996 hearings before the U.S. Senate Judiciary Committee on the Partial-Birth Abortion Ban.

French described how physicians recommended aborting her twin daughter, Mary, after she was diagnosed with an occipital encephalocele, a form of spina bifida. (Encephalocele is a neural tube defect characterized by sac-like protrusions of the brain and the membranes that cover it through openings in the skull. The occipital region consists of the back and lower part of the skull.) However, the Frenches were determined to do everything possible to save their daughter. And if they found they were unable to take care of her, they learned there were couples awaiting adoption. Mary lived just a few hours after birth. Her father had a chance to hold her. But that’s not the end of Mary’s story.

Jeannie testified, “Three days after Mary died, on the day of her interment at the cemetery, Paul and I were notified that Mary’s heart valves were a match for two Chicago infants in critical condition. We have learned that even anencephalic and meningomyelocele children like our Mary can give life, sight, or strength to others. Her ability to save the lives of two other children proved to others that her life had value—far beyond what any of us could ever have imagined.

“Mary’s life lasted a total of 37 weeks, 3 days, and 6 hours. In effect, like a small percentage of children conceived in our country every year, Mary was born dying. What can partial birth abortion possibly do for children like Mary? This procedure is intended to hasten a dying baby’s death. We do not need to help a dying child die. Not one moment of grief is circumvented by this procedure.”

“Our daughter, living less than a day, saved the lives of two other children. Which of us, even after decades of living, can make the same claim?” Jeannie asked.