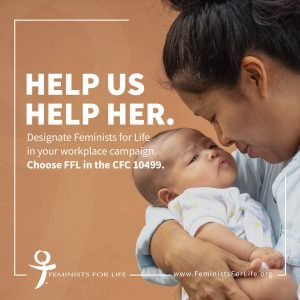 Today, the U.S. House of Representatives is scheduled to consider H.R. 6757, the Family Savings Act of 2018, which includes language recognizing the humanity of the unborn child.

Currently, Section 529 of the IRS code allows individuals to make tax-advantaged contributions to an account intended to save for a child’s future education expenses. Feminists for Life of America supports the expansion of 529 plans in section 302 of H.R. 6757. “The Family Savings Act of 2018 measure enables families to use these education savings toward apprenticeship fees, the cost of homeschooling, or paying off student debt. As Feminists for Life, we express our appreciation to all who led this effort and all who vote for this bill in the House. We urge the Senate to join in this effort,” said FFL President Serrin Foster.

The manager’s amendment adopted yesterday in the Rules Committee would also recognize unborn children as eligible designated beneficiaries for 529 accounts. The amendment’s definition of an unborn child is as follows:

(B) UNBORN CHILD.—For purposes of this paragraph—
(i) IN GENERAL.—The term ‘unborn child’ means a child in utero.
(ii) CHILD IN UTERO.—The term ‘child in utero’ means a member of the species homo sapiens, at any stage of development, who is carried in the womb.

This definition is identical to the language in the Unborn Victims of Violence Act (18 USC 1841). Enacted in 2004, this law recognizes that when a criminal attacks a pregnant woman and kills or injures her unborn child, there are two victims of that crime.

FFL President Serrin Foster was the only feminist to testify on behalf of Laci’s mother and Conner’s grandmother, Sharon Rocha, and in support of the Unborn Victims of Violence Act, aka Laci and Conner’s Law, saying: “It is also worthwhile to note that outside the context of abortion, unborn children are often recognized as persons who warrant the law’s protection. Most states, for example, allow recovery in one form or another for prenatal injuries. Roughly half the states criminalize fetal homicide. Unborn children have long been recognized as persons for purposes of inheritance, and a child unborn at the time of his or her father’s wrongful death has been held to be among the children for whose benefit a wrongful death action may be brought. Federal law similarly recognizes the unborn child as a human subject deserving protection from harmful research.”

Referring to the legislation before the House today, Foster said, “Women deserve better. Fathers deserve better. And our children deserve better. This is a great step in the right direction to secure long-term financial and educational needs, especially for the most vulnerable. It’s a win-win.”