Feminists for Life’s pro-woman, pro-life lectures create a groundswell of support for FFL Pregnancy Resource ForumsSM by raising awareness about the needs of pregnant students and student parents, sparking a discussion about pregnancy resources available on campus and emphasizing needed improvements. FFL’s Pregnancy Resource Forums then move the discussion beyond the often polarizing abortion debate to a working dialogue, inviting key campus policymakers and students to work together to find solutions for pregnant and parenting students. 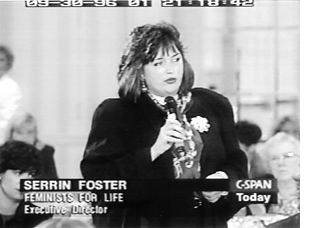 FFL Pregnancy Resource Forums began when FFL President Serrin M. Foster realized that in all her time spent visiting and lecturing at college campuses, she had rarely seen a visibly pregnant woman. “Where have all the pregnant students gone?” she asked. Former FFL board member Jeanne Pryor illuminated the reality of the situation for women on campus by sharing her story as a young pregnant student during a board meeting: “Without housing, daycare, and maternity coverage, it didn’t seem like much of a choice.”

“That powerful statement took Feminists for Life’s philosophy to the next level: real solutions for those with the highest risk of abortion, and focus on future leaders. At the end of the meeting, we knew that we could actually change the direction of the debate. Rather than simply arguing over one of the worst things that could happen to women—abortion—we would focus on transforming society by advocating for solutions so that abortion would become unthinkable,” Foster said.

Aside from creating and strengthening on-campus resources for pregnant and parenting students, FFL’s Pregnancy Resource Forums serve to bring the issue of student parenting out of the shadows and into the forefront of student life on campus. As Director of Health Education Services at Georgetown Univeristy and annual Georgetown University panelist Carol Day has stated, the forum is “an opportunity to let people know that there are students choosing to be parents and that the university will support that. It is a good opportunity to say, ‘You might not think about [pregnancy resources], but we do, and we’re trying to encourage students and let them know that pregnancy and parenthood is a reasonable option for them.’”

Feminists for Life’s events has led to crucial resource development on campuses across the nation:

• After FFL Honorary Co-Chair Patricia Heaton spoke at to a packed hall at Pepperdine University in California, Dean Mark Davis invited Serrin Foster to moderate a Pregnancy Resource Forum. Before the Forum, Heaton and Foster met with members of the task force dedicated to examining campus resources and developing proposals for improvement. Realizing that some women who had just learned of their pregnancies were not aware of all the resources available on and off campus, a new handout was created for women who had just learned they were pregnant from health center staff. Pregnant women learned they wouldn’t be thrown out of school and would be given practical resources. Family housing was also created, and the Student Handbook was modified to include pregnancy resources and information.

• Following an FFL lecture on campus in 2009, student parents at Loyola University in Chicago were inspired to establish an informal childcare co-op to help meet the needs of student parents and their families.

• The pro-life student group at University of Maryland created a Pregnancy Resources Committee, as well as a new Pregnant and Parenting Services website.

• An entire network of student-parent support was strengthened at Grand Valley State Univeristy in Michigan, emphasizing collaboration among the on-campus Women’s Center, the Children’s Center, and the Health Center. Improvements included the installation of diaper decks in restrooms, lactation stations and nursing rooms for student mothers, and an online database to advertise resources and connect student parents.

• After Serrin’s speech, Wellesley pro-life and pro-choice students held a back-to-school rummage sale with items students left at the end of the previous school year. They raised over $4000 to help student mothers on campus.

• Students at the University of Virginia established free babysitting services for student parents.

• North Carolina State University held a potluck dinner to help connect parenting students to one another, encouraging them to form their own network of support.

As you can see, once you begin making a list of ways student activists can help pregnant students and parents on your campus, the possibilities are endless! When you create small steps for change and work to revolutionize your entire campus, you help make the crucial difference for women and children on campus.

Share your creative solutions and keep the revolution alive! We want to know about your efforts—so be sure to keep us updated on what you are doing on your campus to support pregnant and parenting students. Send your ideas to info@feministsforlife.org so we can share your progress with other pro-life student leaders!