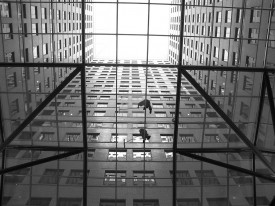 In the summer of 1998, The American Feminist published an article titled “The Importance of Fatherhood,” featuring the National Fatherhood Initiative (NFI). Founded by psychologist Wade F. Horn in 1994 “to improve the well-being of children by increasing the number of kids growing up with committed and responsible fathers,” the NFI provides resources and support to many local groups seeking to help men become better fathers and advocates for innovative workplace reforms, such as paternity leave, telecommuting, and flex-time. What progress has been made to allow men to achieve the work-family balance that women have been pursuing for so many years?

For one answer to this question, we can turn to a report released just before Father’s Day 2010 by the Center for Work and Family at Boston College, “The New Dad: Exploring Fatherhood Within a Career Context,” by Professors Brad Harrington and Fred Van Deusen of Boston College and Professor Jamie Ladge of Northeastern University. The researchers interviewed 33 working fathers in order to better understand how the dual roles of breadwinner and caregiver “integrate, conflict, and enrich one another.” Their report mentions the tremendous progress that women have made in educational and career attainment and the corresponding pressure that this success has placed on men. According to Census data published in 2008 by the Bureau of Labor Statistics, 70 percent of U.S. households with children include two working parents. The report highlighted major generational shifts as well, with younger working parents placing a much stronger emphasis on achieving a work-life balance than did earlier generations of mothers and fathers. These factors have led to increased pressure on the corporate world to accommodate working fathers’ changing role in our society.

It appears, based on the interviews in the Boston College study, that this pressure has had some positive effects. All the men interviewed for this study were recent first-time fathers, with a child between three months and four years of age. All were college-educated and married with wives who worked outside the home, and all of the men had at least five years of experience in the workforce. When asked to reflect upon how becoming a father affected their status in the workplace, virtually all the men interviewed reported very positive experiences. In general, most reported more positive responses from co-workers after they became parents. They became “members of the parent club” and formed friendships with other parents. They were also perceived almost universally as more credible, responsible, and mature once they became fathers.

The study also showed that managers, especially young managers, were very accommodating towards men dealing with work-family issues. While none of the men had formally changed his schedule or contractual arrangements because of fatherhood, many reported ease in obtaining informal flexibility for family issues. They also said that both their supervisors and the workplace culture in general were very supportive of their new role and accommodating of the demands it made on their time.

Yet the picture was not entirely rosy. Some of the men reported bosses, workplace cultures, or certain types of jobs that did not accommodate their new responsibilities. Jobs that required a significant amount of travel or projects demanding long hours were particularly difficult for the fathers interviewed. Most of the men in the study had initially underestimated the degree to which their new status as parents would affect their attitude towards their careers and inhibit their progress on the “corporate ladder.” In the end, however, virtually all of the men said that becoming a father was a positive experience overall when viewed in relation to their careers. They were more likely to redefine what constitutes “success” than to lament losing out on promotions or salary increases they might have received had they not become parents.

The authors of the article caution that it would be inappropriate to draw conclusions about an entire generation of parents based on qualitative research with such a small group of new fathers, but they do point out some interesting differences between their findings and a similar study of working mothers from 2008. Women took longer leaves than men (on average, three months versus three weeks) and were more likely to ask for formal changes in their schedules upon their return. Women also reported more mixed messages from co-workers than did the men. If they returned full-time, they were often asked about the negative impact that would have on their children, while if they returned part-time, they were questioned about the negative impact that would have on their careers. According to the authors of this study, it appears that men’s careers are not expected to change by becoming fathers. There still exists the assumption that being a good “breadwinner” is largely sufficient in making someone a good father.

The study also acknowledges that the workplace expectations of men and women have yet to live up to the feminist ideal — mostly because of lingering structures that reinforce mid-twentieth century gender roles:

Fathers struggling to balance career aspirations with a focus on parenting, thereby finding legitimacy in both work and home spheres, may encounter “paternal walls” not unlike the maternal walls working mothers have faced… While organizations may have policies in place to assist parents of both genders, a true family friendly culture that supports their use, especially by fathers, often lags behind. The new fatherhood imperative, that requires greater work flexibility for dads to take charge or at least equally share in childrearing and household responsibilities, faces challenges with the reward systems and organizational cultures that have not changed to reflect these new ideals. Ideal work norms still reward on the basis of competition and loyalty where long work hours show commitment to an organization…. Men who challenge such norms may be even more open to critique than their female counterparts.

The authors conclude: “Men seem poised to embrace a new definition of fatherhood and to step up to the challenges and the rewards of parenting in a much fuller sense than was the case in the past.” They assert that men’s role in home and family life needs to be respected, not trivialized by “Mr. Mom” jokes or stereotypes of incompetence. In other words, there has been considerable progress in redefining the roles of both mothers and fathers who balance work and family obligations, but there is still the prevailing attitude that for men, the primary domain is the workplace, and family and home life is secondary, while for women, the two domains are considered equally important. Changing these attitudes about the proper work-life balance for men is the responsibility not only of working fathers themselves, but also of their spouses, families, bosses, coworkers, and friends.