Read this and understand how her experience is now empowering a new generation of leaders on campus — most recently at our Annual Capitol Hill Briefing. It is raw, and real, and helps our future policy makers and leaders in every field better understand the reality of violence against women, sudden poverty, and most important, how women are strong enough to choose victory over violence.

Our work is urgent. Read on. 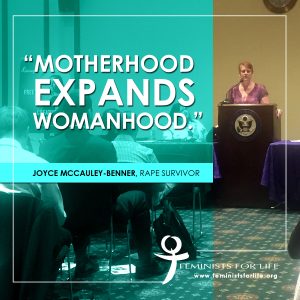 Sometimes when so much has happened, it’s hard to know where to start.

Like many college students, I wanted to move away from home and experience life on my own. I chose to move 1,100 miles away and worked two jobs and used financial aid to support this dream.

One of my jobs was at a restaurant.

One night, a cook in the restaurant started to show some favoritism towards me. The other servers were annoyed as my orders came out faster and better and the tips increased. I didn’t think much of it, until I was pushed inside a freezer and the cook made sexual advances towards me. No matter the number of times I broke free, it happened again.

Later that night, he raped me.

For the next several weeks, I tried just to keep my life barely intact and my classes at a passing level. About two months later, I went to my on-campus health center for a checkup. I asked the nurse if I was pregnant. She assured me I wasn’t and kept telling me the test would be negative. I wanted to believe in her confidence, but I had this nagging feeling that I was pregnant.

She comes quietly back in a state of shock and lays the positive test down in front of me. I begged her to tell me what to do. She told me to take a prenatal vitamin, find a doctor, and be on my way. That was it.

I walked out in a daze. Was the cook this baby’s dad? Some jerk who hurt me, for fun, in spiteful laughter, as he when he was done, said, “See ya round, bitch”? Could that moment, in all its ugliness, possibly have fostered a child??!!

Or did this baby belong to me and to my boyfriend, whom I loved deeply, who had been with me in loving times and fun-filled times?

I had to wait until the birth to know.

Despair came in fast and furious. Either way seemed a dead end. Surely, either way was hard. Did I think about abortion? Sure. I wanted so badly for the pain to go away; the unknowing, but even abortion wouldn’t put the question of paternity to an end.

And I still didn’t know what to do. I was in a new town, no family, few friends close by, no health insurance, and not a clue how to take care of myself during pregnancy.

One day, during a desperate call to my friend from home, I went over my so-called choices. She made a comment to me. “I know you are feeling overwhelmed with sadness and pain and despair right now, but just know, no one feeling lasts forever. An abortion will.” That hit me like a ton of bricks.

Upon deeper reflection, I realized that while I did not know who the father of my baby was yet, I did know who his mother was. And that was me. There was as much of me inside this baby as there was the rapist, or my boyfriend. How could I discount and allow yet another piece of me to be taken away?

I didn’t have much. But I had enough.

So I moved back home and had my baby boy. My boyfriend didn’t sign the paternity papers at the birth because we he still didn’t know if he was the father, and his friends and family encouraged him not to. It would take three months to learn who the dad was. But it didn’t matter to me anymore, at least not as much. In Joshua McCauley’s eyes and tender hands I saw that part of me, fragile, needing love and support, but also full of life.

To learn later, that women like Susan B. Anthony and Elizabeth Cady Stanton celebrated motherhood as a part of womanhood, was very empowering. I was not going to be transformed from a woman to a mother, but rather, my womanhood experience was expanding, enhanced by motherhood.

When I chose single motherhood, it was hard.

You probably have heard the statistics. Single moms are most at risk for living in poverty. Most of us go to college to pursue degrees that will allow us to have good-paying careers. So imagine trying to juggle school, to get that degree, to get that job, all while figuring out childcare, housing, utilities, diapers, etc.

Suddenly, the easy days of dorm life are gone.

I started out moving back home with my parents. My mom and I knew that the “welfare” office was a place to start. But I assure you, we were not prepared for the five-hour wait, the rudeness of the workers, the exasperation of not knowing the rules, the endless paperwork, and the months we waited for benefits to start.

Everyday life was a struggle as a single mom in poverty. Take the most stressful week of your semester — staying up all night working on projects, papers, preparing for exams — that was my DAILY stress. Not having enough money to buy food, pay the bills, working with a system that treats you like dirt and a society that judges you the same.

THIS is the feminization of poverty. BUT we as women are NOT crushed by it, nor should our children be! 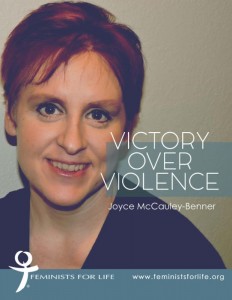 In addition to speaking for Feminists for Life, I went on to graduate not only with my undergrad degree but later with my master’s as well. Today, I also run a low-income utility assistance program, so I’m able to help women in the same situations as I was.

I persevered through it all and tapped into a strength within myself I never knew I had. We, as women, can sell ourselves short sometimes.

The status quo will tell us we can’t do it, we shouldn’t do it, or force us to choose between our dreams as women and our desires as mothers.

The status quo will tell us that the paternity of the child matters more than the mother.

The status quo will tell us you cannot heal from rape if you have the child.

The status quo will tell us that we will be overwhelmed, that we are not creative or strong enough to endure a crisis.

But I am here to tell you, we deserve better. I said No to the status quo and achieved my own victory over violence.

I said that Joshua McCauley’s mother meant more than the paternity test result.

I said that you can heal from rape and bear a child.

I said that I am more creative and powerful than any injustice done to me.

I am victorious over violence committed against me!!

This is the message we deserve and need to hear.

Contact us now if you are interested in bringing Joyce or another speaker to your campus or pro-woman, pro-life event.

Support us now — while the double-match is on for new and increased gifts. Includes membership!